The Videomic pro is very small for a shotgun mic, and the first thing you notice is that it's incredibly light, at 85g. Adding the 9V battery that powers the mic takes the weight up to about 120g, which is still not weighty. It took me a while to work out where to put the battery, so to save you the same bother, the compartment is located on the front of the body, beneath the mic capsule itself, and has the signature Rode gold dot on the front. Pushing this door towards the capsule pops it off. The door isn't hinged, so bear in mind that it could be lost, and getting the battery in is a pretty tight squeeze! Considering the space saved by this design, I didn't mind the location, and once the battery is there, you'll get up to 70 hours of use from it, assuming it's an Alkaline unit and depending on your gain settings.

The controls are located on the rear of the mic and are very simple. The upper switch has three positions: off, on and high‑pass filter. The filter activates a roll‑off at 80Hz, dropping off from about 100Hz at a little more than 10dB per octave. It's useful for attenuating handling noise, wind noise and low frequencies boosted by the proximity effect (an increase in bass response near to a sound source, common to all directional mics).

Three gain settings are provided, at ‑10dB, 0dB and +20dB, as opposed to the Videomic's ‑20dB, ‑10dB and 0dB settings. Though the +20dB setting looks a little unusual in this context, it proves extremely useful when using cameras with poor gain circuitry, as I later found out.

The mic's quoted frequency response is relatively flat, with a 5dB lift beginning at 5kHz, peaking around 12kHz and rolling off to ‑5dB at 20kHz. This is quite a common response curve, one that enhances perceived speech clarity, and goes some way (in the case of shotguns, especially) to counteracting the attenuation of high frequencies caused by wind shields. The mic is rated to handle maximum SPL peaks of around 134dB at 1kHz, so there's plenty of headroom available for loud environments before the mic itself will clip. 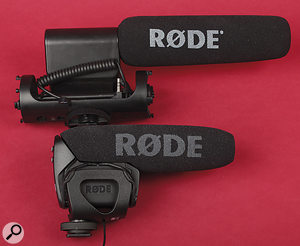 The original Rode Videomic is pictured above the new Videomic Pro. Though it may not look like much, the reduced size and weight make a lot of difference to handleability!In an effort to create a more compact mic, Rode have designed a custom shock mounting that's a far cry from the previous model's bulky construction. The new fixture features a 'shoe' mount, as before (for attaching to cameras), with a screw thread in the base for attaching to a boom pole. The mic is suspended about 1cm away from this mount by a pair of custom rubber shock‑absorbers. These are a great improvement over the simple rubber bands used by the previous Videomic, which had a tendency to go missing. I once met someone who had used a little superglue to fix them in place! He'll be happy to know that not only are these new types in no danger of falling off, but that two spares come with the package, just in case.

The polar pickup pattern of the mic is super‑cardioid, so it will reject a good deal of off‑axis background noise. This makes it useful for close‑range interviews, or other work where a speaker is relatively near the mic (around 6‑10 feet). A foam windshield is provided with the mic, and a free Deadcat VMP Furry Windshield (for harsher conditions) is available to users who register for Rode's generous 10‑year warranty.

The original Rode Videomic has had plenty of use by myself and colleagues at trade shows (noisy environments) and works well there, being efficient and portable. The reduction in size of the new model is certainly welcome, and the Videomic Pro sits much less obtrusively on small cameras. It's also easier to pack away, given the compact shape, which is always great news when travelling with your kit.

The smaller form‑factor gives the mic a centre of gravity near to the mount. This is not only useful for stabilising systems that rely on weight distribution (such as a Steadicam), but also for fixing the mic to small cameras, such as hybrid video and still cameras or DSLRs. The shockmounting is very effective, and removes general handling noise with no trouble at all. It should be noted that the close proximity of the cradle to the mic body means that extreme movements from side to side are likely to cause the mic to knock the edge, causing bumps in the recording. These movements wouldn't be needed on your average shoot, but this should be kept in mind if you're thinking of running around with your camera, as a larger mounting system would be a must‑have in that situation.

The tone of the new mic is extremely similar to that of the Videomic, offering a characteristically rich mid-range with an emphasis on vocal timbre. To my ear, the Videomic Pro sounds a little 'lighter' than its predecessor, less congested in the mid‑range and more open at the top. This could be down to updated preamp circuitry or the subtle change in capsule design, but either way it's a welcome development.

The high‑end lift shown in the response curve allows dialogue to cut through the mix in a variety of environments, though some may find the tone very mid‑rich with certain speakers. To my ears, the mic doesn't exhibit the same level of open fidelity as the Rode NTG2 and NTG3, but it's much more convenient than the former and much less expensive than the latter.

Off‑axis rejection is good in many situations, though you won't want to get yourself caught too far from the subject. Despite being a shotgun, the Videomic Pro's polar response isn't as directional as something like a Rode NTG3, for example, so long-range dialogue work is a little out of its comfort zone! From six feet away with moderate background noise, as an example, the mic will work perfectly well.

Achieve superb audio capture in demanding conditions for your next professional film, TV, or location recording with the Sennheiser MKH 416-P48U3 moisture-resistant shotgun microphone. Mix-ready sound quality is provided by its sharp directivity, low noise, and strong output. Plus, there are no controls to worry about; the MKH 416-P48U3 delivers the reliability you need for high-pressure..